Endorsements are for Washington State’s August 3 primary election. Vote as soon as you can and make sure to return your mail-in ballot no later than 8 PM on August 3! You can register online or via mail to vote until July 26 but can register in-person at any time, including on election day! For more information or to register online please visit Washington’s Secretary of State election website.

Please join Humane Voters of Washington for a Zoom fundraiser on Sunday, April 25 to re-elect Dave Upthegrove to the King County Council! 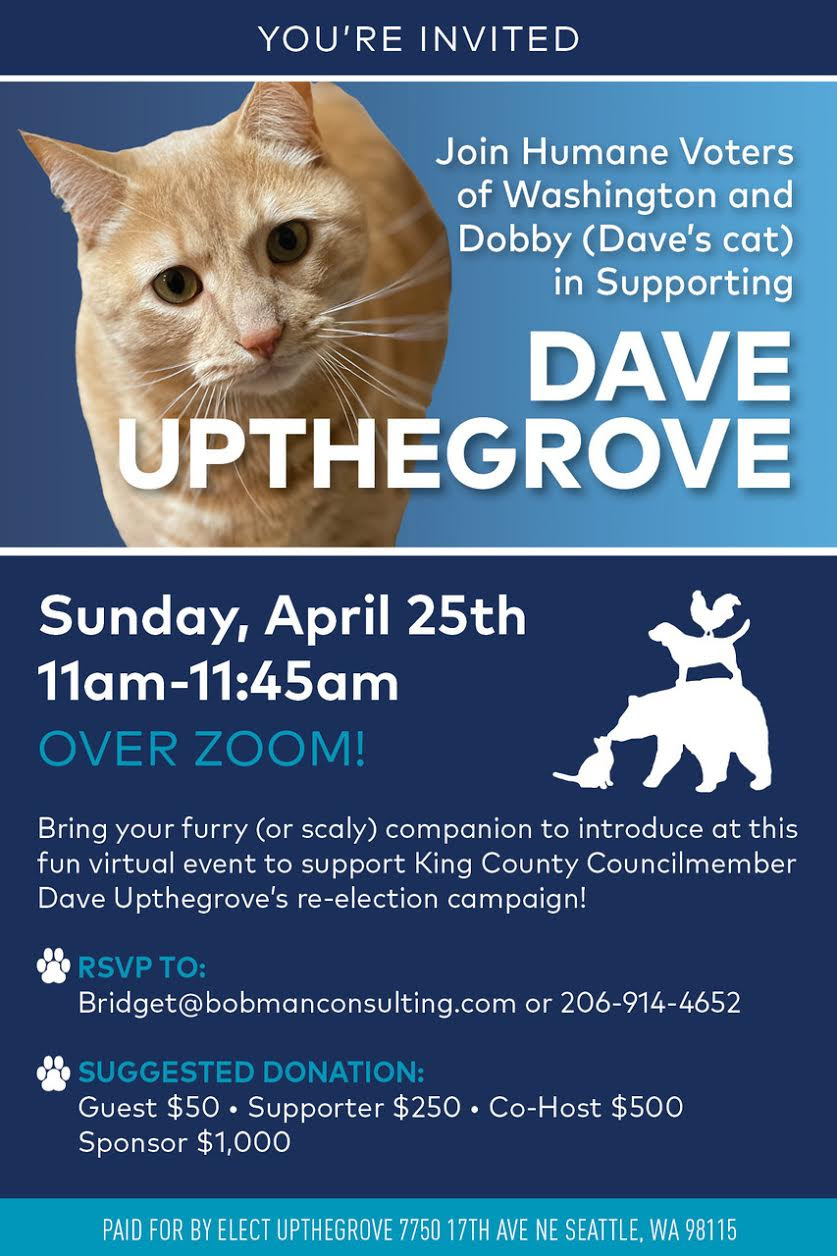 Dave’s commitment to animal welfare issues began in college where he served as President of the University of Colorado Animal Rights Group. Later, as a Washington State legislator, Dave helped lead the effort to defend citizen initiatives that banned the cruel and inhumane use of steel-jaw leghold traps as well as bear-baiting and hound hunting. His consistent support for animal issues earned him the Humane Society Legislator of the Year award. On the King County Council, Dave has been working to end the use of fetal pigs in the training program used by county paramedics. Dave and his husband have taken in feral cats and an elderly shelter dog, and currently share their home with their beloved cat, Dobby.

Bring a cup of coffee and your furry, feathery or scaly companion to introduce at this fun virtual event, and learn more about how Dave is helping animals! RSVP by making a contribution of any amount HERE or email Bridget@bobmanconsulting.com.

We hope to see you and your animal friends on April 25!

Endorsements are for Washington State’s November 3, 2020 general election. Vote as soon as you can and make sure to return your mail-in ballot no later than 8 PM on November 3!

Endorsements are for Washington State’s August 4, 2020 Primary Election. Vote as soon as you can and make sure to return your mail-in ballot no later than 8 PM on August 4, 2020!

Endorsements are for the November 2019 Washington State general election. Vote as soon as you can and make sure to return your mail-in ballot no later than 8 PM on November 5, 2019!

You can register online to vote until October 28, but can register in-person at any time, including on election day! For more information please visit.

We are excited to announce our endorsement of Heidi Wills for City Council! Heidi, who was a Seattle council member from 1999-2003, is running for Seattle City Council District 6. While in office twenty years ago Heidi lead the effort to ban circuses with wild animals from using Seattle city facilities and championed the removal of the Snake River Dams to restore salmon runs to our ailing resident orca population, an issue of even more urgency today. Since her time on the council, she’s served on the board of the Sierra Club, Conservation Northwest and Climate Solutions. If re-elected we know she will be a leader on animal and environmental issues on the council!

To find out more about Heidi please visit her campaign website: https://heidiwills.com/. Seattle residents: you can donate your Democracy Vouchers to Heidi even if you’re not in District 6!

Electing humane legislators is more important than ever for animals, but to participate you MUST register to vote! In Washington State you can register by visiting the Secretary of State’s website or here if you’re outside Washington State. Don’t wait, register now to help animals!

Odd numbered years mean municipal elections. Counties and cities will be holding elections for executives, mayors, commissioners, councils, supervisors, auditors, school directors, and other local offices. Each one has many elected officials with varying degrees of influence. Although there are usually contested races in the larger municipalities for offices such as County Commissioner or Mayor, many of the offices in smaller municipalities often go uncontested and sometimes without any candidates for the post! This is usually because the posts are part-time and offer no pay or a minimal stipend for attending meetings. There is no easier method by which to influence the established order than by carefully identifying the offices for which there are no challengers and becoming a candidate yourself.

Right now is a particularly good time to be seeking office for the first time.

Voters are restless and want change! They are willing to support someone new to government. Now is the time to evaluate if you may wish to become an elected advocate! Begin by contacting your county voter/elections administration office to determine what public offices will be on the ballot in your municipality.  Pay close attention to deadlines.

Some of the information for this article was provided courtesy of Senator Roy C. Afflerbach, Ret., Treasurer of the Humane PA PAC.